The quality of food cooked at home has also improved with women maintaining kitchen gardens, where those who didn’t have land, grew vegetables in the farmlands.

In the tribal belt of the Nimar region of Madhya Pradesh, members of SHG groups are asserting themselves as Sachet (meaning ‘alert’) Didis and Siksha Sakhis, in community health and education, respectively. The region includes the districts of Burhanpur, Khandwa, Khargone, Barwani and Dhar, where the women belong to the Korku, Barela, Bhil, Bhilala and Gond tribes.

They are challenging the local governance systems, ensuring that institutions function so that women, girls and children receive their basics entitlements. 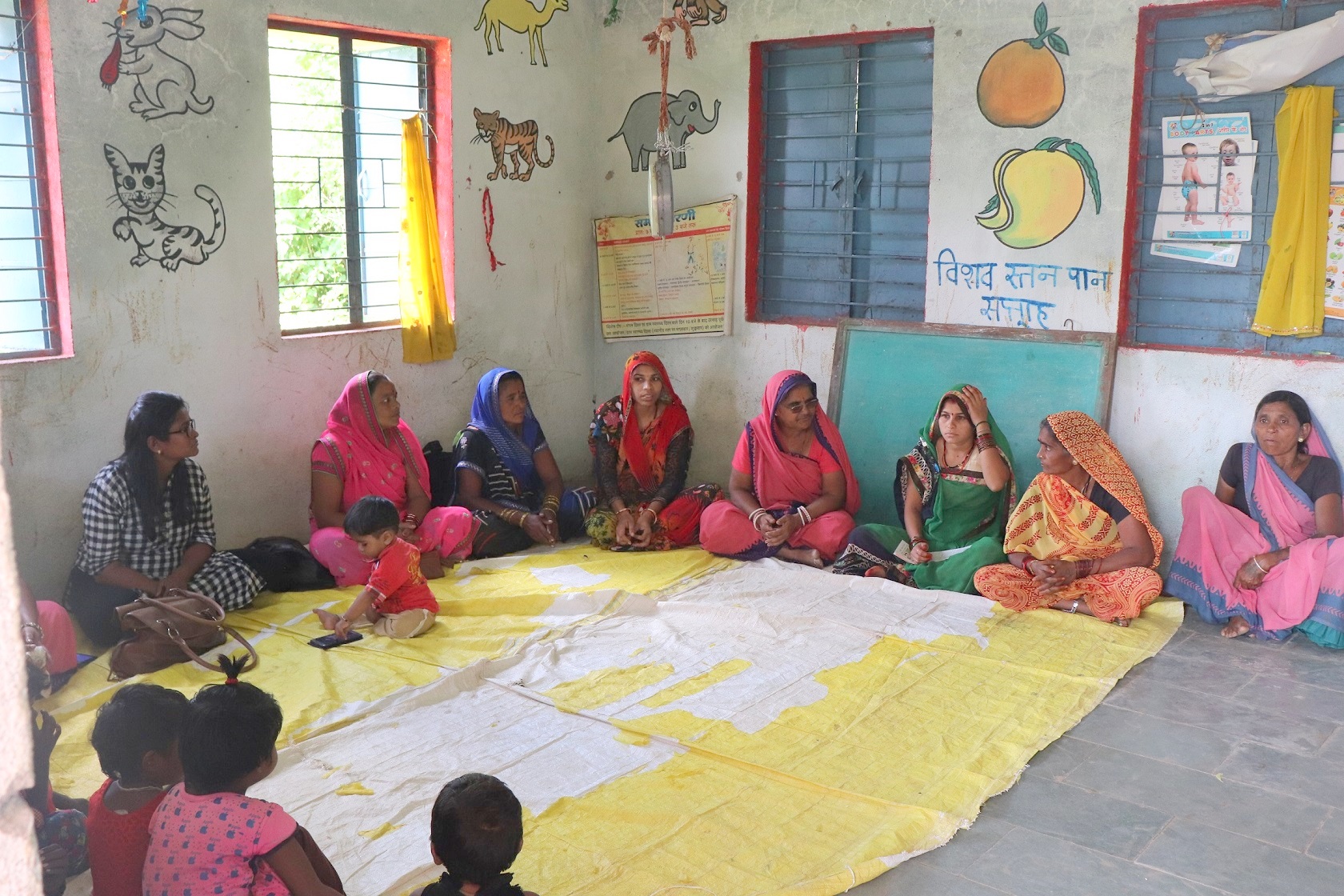 Women meet at the Anganwadi Centre.

Munnibai is the president of the Tapti Laxmi Mahila Mahasangh, which is a federation of 304 SHGs from 24 villages. Sachet Didis Shaguntibai and Shamabai shared how the setting up of the SHGs reduced their dependence on money lenders; with their savings as a collective unit, the women can take loans on small interest amounts.

Selected by the village level organisations and facilitated by the Aga Khan Rural Support Programme India (AKRSPI), the Sachet Didis were trained at Khandwa as community-level health workers in 2017. Although both women had little or no formal education, as active SHG members, they became savvy about rural issues. The training by the Ahmedabad-based NGO CHETNA made them aware of health issues, government programmes and how to apply for these.

Among the women assisted by Shaguntibai was Geeta, 30, who was pregnant with her third child and towards the eighth month, was having difficulty in urinating. She was advised to stop farm labour and was taken by Shaguntibai to the PHC where she delivered a healthy baby.

Geeta’s current health problem is a prolapsed uterus, for which she has been advised a hysterectomy. As a person below-the-poverty-line (BPL), Geeta is entitled to medical assistance rolled out by the government to the tune of Rs 5 lakh, under the Pradhan Mantri Jan Arogya Yojana.

“With the support of the teachers and the ASHA workers, the Sachet Didis and Siksha Sakhis ensured that all BPL women in the village between 18 and 60 years in the village received the benefits of various government schemes, central as well as the state.”

Geeta is expected to be the first woman from her village to utilise the health card for hysterectomy.

All BPL women are entitled to Rs 16,000, for their first pregnancy. Of this amount, Rs 4,000 is used for providing them with nutritious food before the delivery and majority of the amount, Rs 12,000, for post-delivery care. To encourage smaller families, the government support for the second child is lesser–Rs 12,000.

In addition to ensuring that pregnant women take their iron tablets and go for regular medical checkups, the Sachet Didis and Siksha Sakhis attend gram sabha meetings. They have silenced the men who would say things like ‘stay at home and behave like a woman’.

In 2010, thanks to the intervention of the women, the village of Daiyat saw its first ration shop. Earlier, they would have to walk to Paretha, which was 3 km away, carrying heavy bags of ration on their heads.

Further, it was only in 2012-13 that piped water supply came to Daiyat. Four applications for water were submitted to the Collector, and the women insisted that he come with them to see their travails fetching water from Tapti River. Now, every home has a tap and pays Rs 50 monthly, for the use and maintenance of the water system.

These SHG members have also breathed new life into the Anganwadis. Alhough there has been an Anganwadi at Daiyat since 1990, it was barely functional. Now, with the community-level workers, 30 to 40 children come to the Anganwadi every day. The Anganwadi sahayak (helper) even goes to homes to bring young ones playing truant.

The children are vaccinated and weighed; and growth charts are maintained. 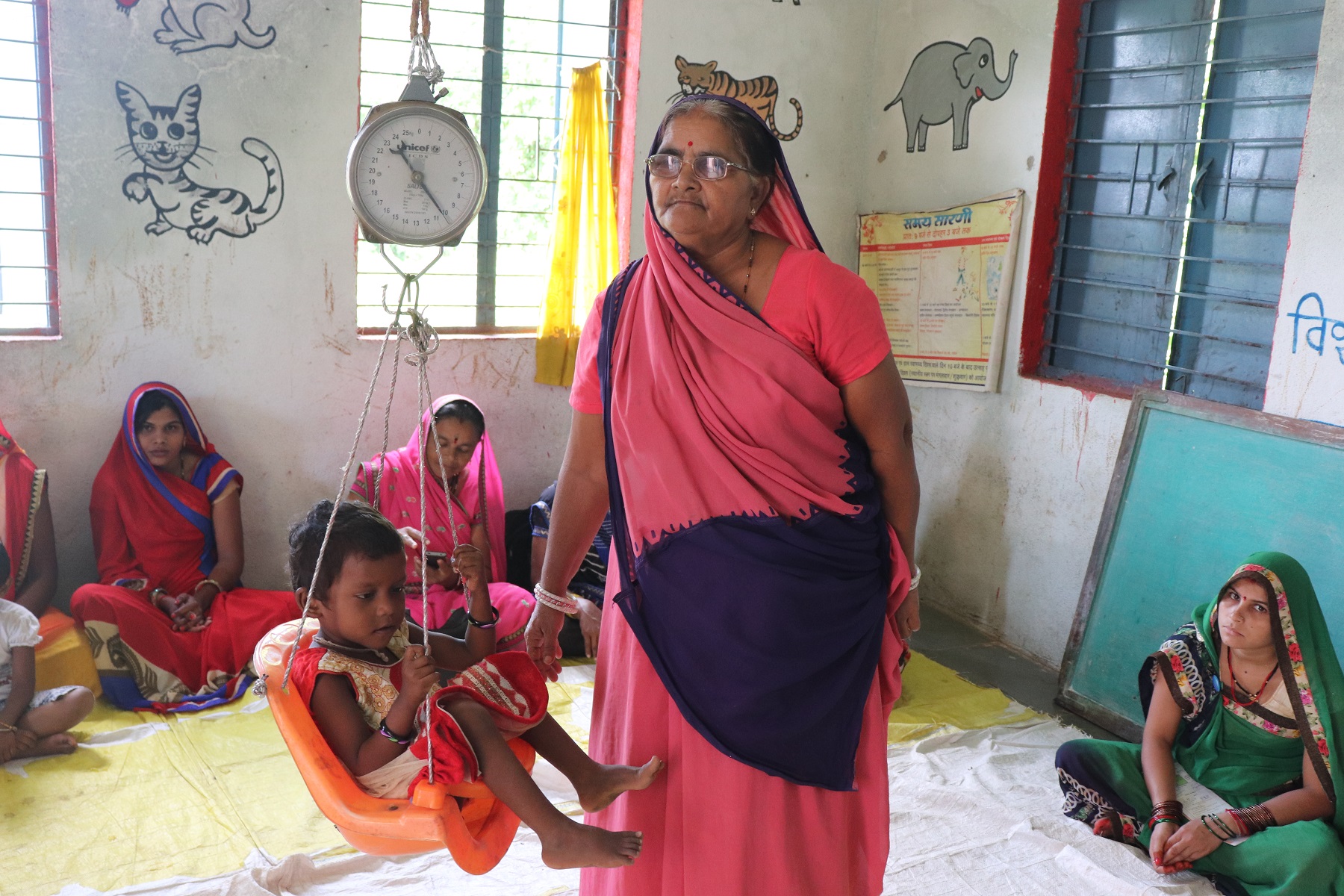 Children being weighed at the Anganwadi.

The four children, identified as malnourished, are getting special attention because their parents were reluctant to stay at the Nutrition Centre 50 km away, for the duration of the treatment.

With money contributed by the community, eggs, bananas and milk are being provided to malnourished children below three years at the Anganwadi every day from mid-September 2018. This is in addition to the regular meals provided at the Anganwadi.

An active health nucleus, the Anganwadi attracts the community four times a month with traditional pre and post birth functions for pregnant women, newborns and adolescent girls. The mid-day meal cooked by the SHG ensures that there is a nutritious menu each day. The children wait for Tuesdays for the kheer and puri feast.

In the adjoining village of Zirmiti, a minor battle was fought by Sanchet Didi Vanita and Siksha Sakhi Rukmani to ensure that pure milk was used instead of milk powder for making the kheer. They also protested about the watery dal and khichdi and insisted that peas be added to khichdi and reintroduced halwa on the menu.

When the SHG said that the allowance for the mid-day meal was inadequate, Vanita told her, “You can leave, and we will provide the meal.” In fact, Vanita’s mother-in-law was one of the cooks for the mid-day meal and was warned that she would be sent to the police lockup. After initial differences, harmony has prevailed at home.

The quality of food cooked at home has also improved with women maintaining kitchen gardens, where those who didn’t have land, grew vegetables in the farmlands. 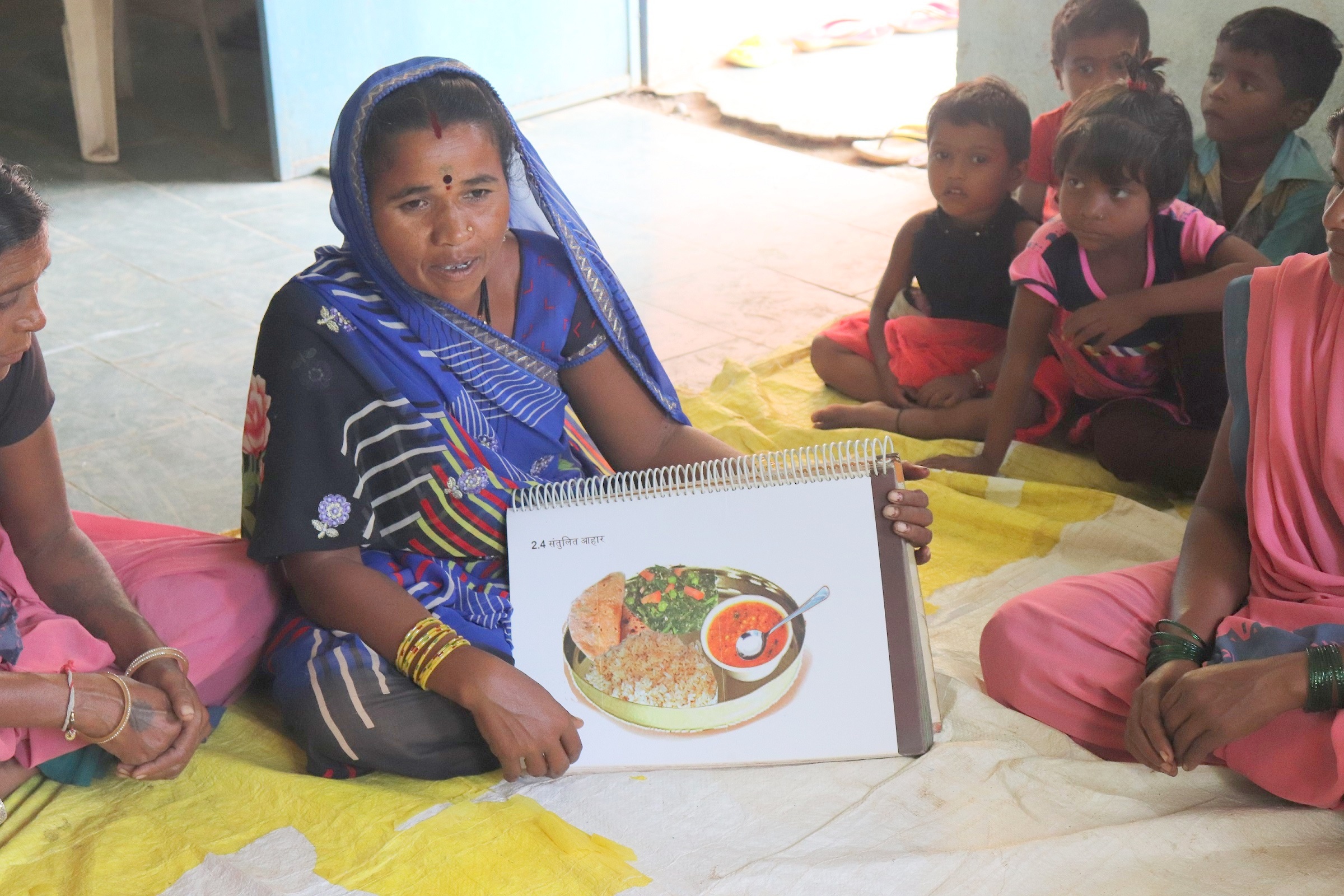 However, some of the women grow enough vegetables to not only provide nutritious meals at home but sell the surplus at the local haat. After the health training meeting conducted by CHETNA, 20 women came back with iron kadhais, because cooking in them adds to the nutritive quality of the food even if it looks black. Thanks to these small but important health interventions, both infant and maternal mortality have come down.

The women SHG members from Zirmiti now make it a point to attend the Gram Sabha meetings, while others are striving for membership to the panchayats. One of the Siksha Sakhis, Durga, became a panchayat member after contesting in the elections.

The Siksha Sakhi programme began over three years ago with technical support from Samavesh, an NGO based in Bhopal. There was a sense of urgency for their intervention because a test of the learning levels of students from classes 8 and 9 at a Federation meeting showed that they could hardly read or write.

Anita and Phoolwati, the Siksha Sakhis at Daiyat village, ensure that children attend the primary school. At the Anganwadi, poems and songs were introduced for early learning.

Mothers, many of whom were SHG members, were motivated to send children to school and ensure that they do homework on returning. 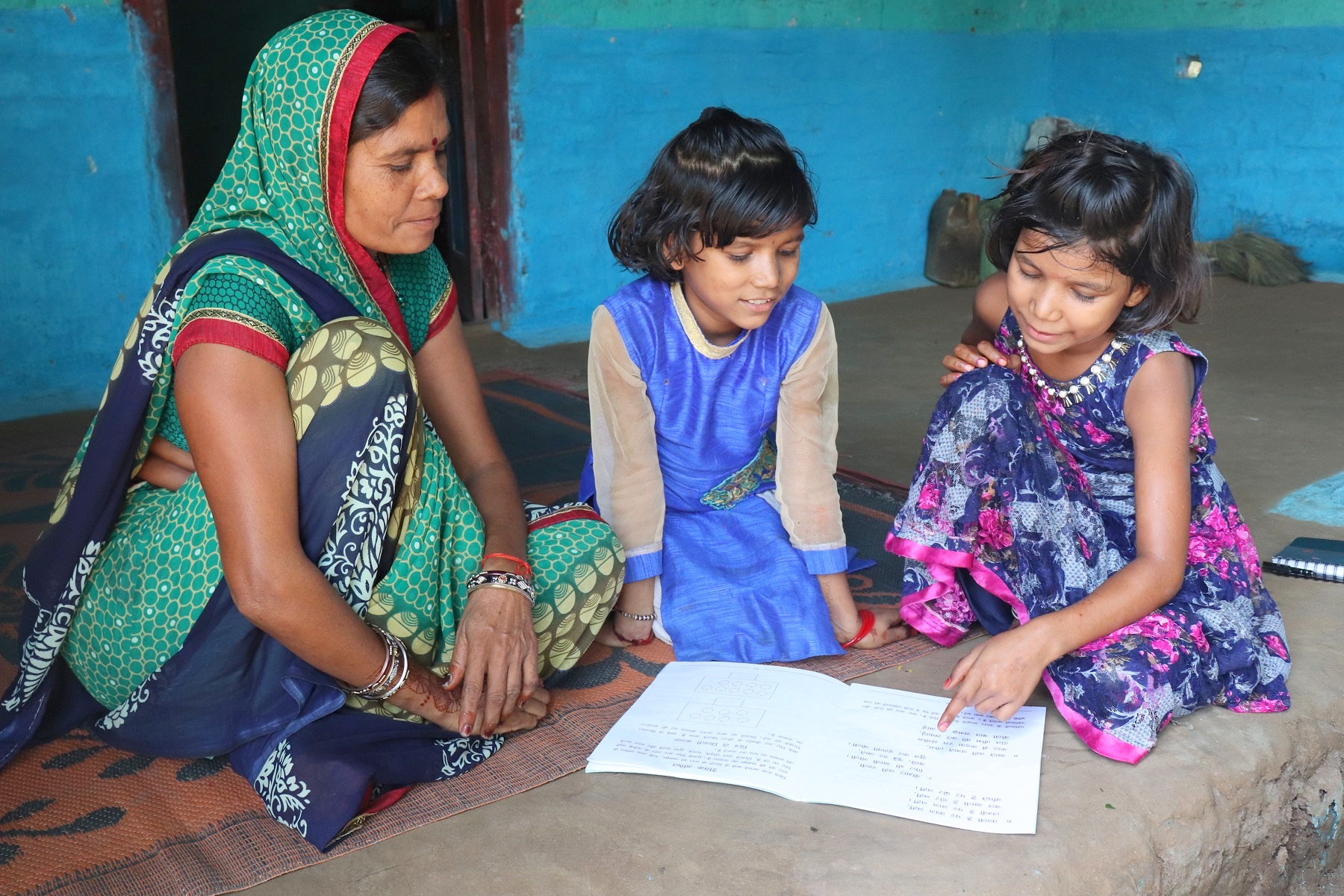 Siksha Sakhi tests the reading ability of the kids.

On Teachers Day, the community honours teachers with coconuts.

To attract out-of-school children, between 4 and 10 years, AKRSP or Adolescent Activity Learning Centre was started at Daiyat with facilities for sports, artwork and crafts. Now, 20-30 girls meet regularly at the Centre, says 18-year-old Priya Keer, a volunteer at the Centre.

A youth mela, anchored by the Siksha Sakhis, with a contribution of Rs 15,000 from the community and a summer camp were big draws this year. With these interventions five girls from the village are attending school for the first time.

The Kishori Balika Manch of about 30 adolescents, is another support group that meets once a month to look at health issues such as menstruation and sanitation. A member of the group brings sanitary napkins and sells them a packet of six for Rs 30.

The School Management Committee (SMC) also has representatives from the community. It meets with the Siksha Sakhis once a month to ensure that the schools run well and the quality of mid-day meals is maintained. Mats (for the students to sit on) are budgeted at Rs 5,000, while chalk and blackboard at Rs 10,000. Ganesh, SMC, looks at the school development plan, ensuring that budgets are utilised.

The model primary school at Ekjira is setting the standards for Daiyat Primary School. Many of the storybooks for the school library have been picked from Bhopal with the help of Samavesh.

It has excellent learning material visible on walls and even on the floor as games, through which children learn to make words and count numbers. 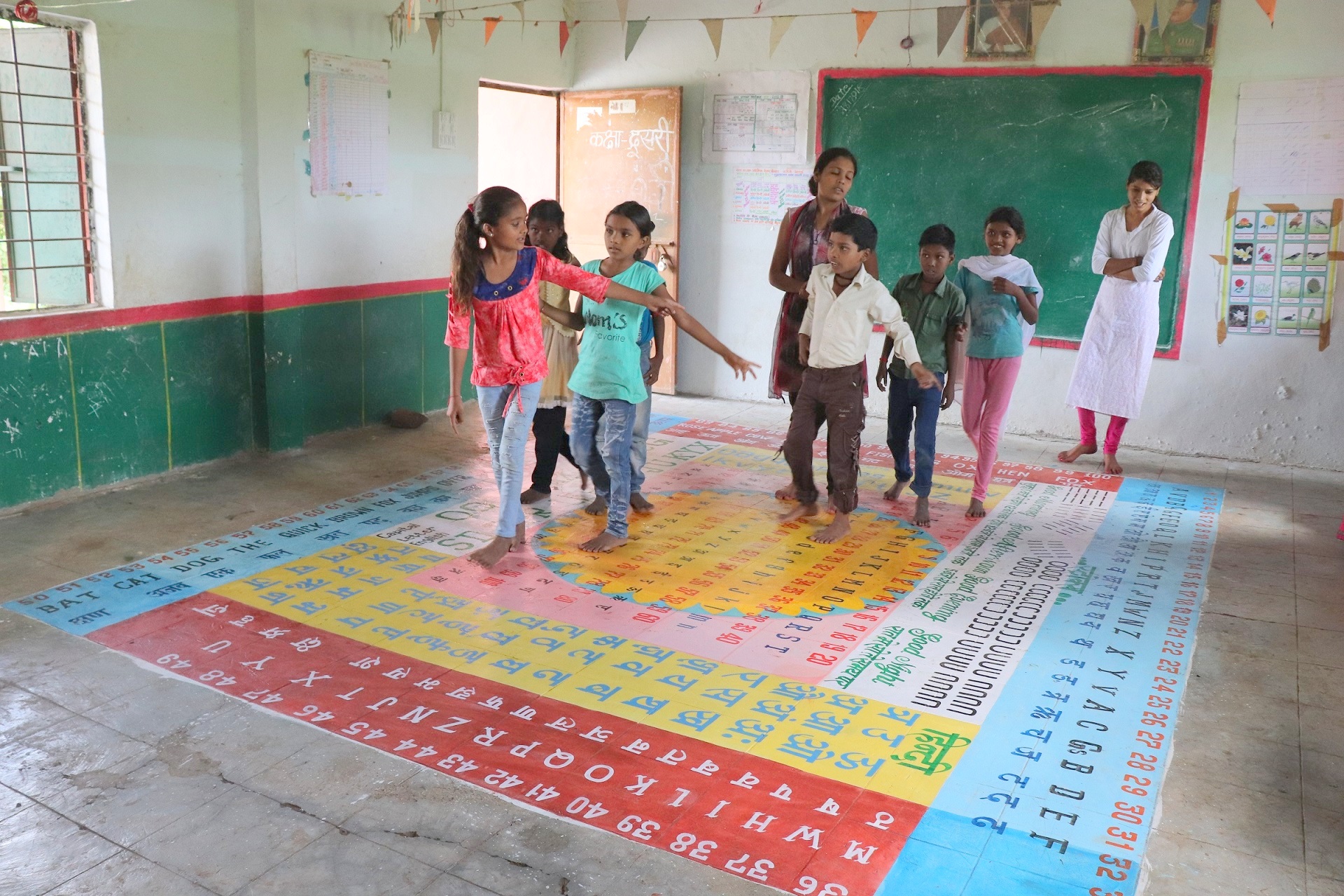 Kids learning and playing at a Primary School.

The Siksha Sakhis from different villages meet once every two months at the Federation meeting to discuss the progress in ensuring quality education in their villages.

The health card for the tribal region, where AKRSP is active, indicates significant strides.

There is no looking back for these villages, says Munnibai, the President of the Federation of SHGs. She concludes, “We have found our voices and know our rights and that of our children. Our children are going to school. We refuse to marry girls below 19 years. We see a new dawn for the Nimar region!”

Be a Part of Our

Connect with us on