NextThe other side of Indian agriculture
Agriculture

A few years ago, Umes Deka of Urangapara village in South Kamrup district of Assam was like any other smallholder farmer in the area, practicing agriculture that barely met the needs of his family. Today, he is a successful vegetable grower who is prospering by using a small pump to irrigate his field.

“I learnt how to grow potatoes when I worked with farmers doing vegetable cultivation in char (river island) areas. They were enterprising farmers and minimized costs in every way possible. Learning from them, I initiated vegetable cultivation on my field with the help of a small pump,” the sexagenarian farmer living near the town of Loharghat told VillageSquare.in. “My field is next to a river and I use both well and water from the river. Now I am trying my best to engage and earn as much as possible from my own fields.”

Small and marginal farmers in South Kamrup, where homestead farming is practiced widely, have recently adopted new engines as tools to boost income from agriculture. These engines are small water pumps of less than 2 horsepower capacity, which are being used extensively to draw water from both surface and ground sources.

In the light of recent announcement in the budget of doubling farm incomes by 2022 and two years into the Pradhan Mantri Krishi Sinchayi Yojana (Prime Minister’s Farm Irrigation Scheme), can small pumps act as drivers to irrigate fields in the eastern parts of the country?

Traditionally, farmers in South Kamrup have been practicing backyard farming, which is of no or little commercial value. While paddy cultivation is done by nearly everyone, vegetables for commercial purposes such as ridge gourd, tomato, brinjal, pumpkin, chilli, etc., are finding inroads and have been adopted by tribal farmers, and has led to substantial increase in incomes for them.

It is commonly held that the chief reason for farm distress in India is the prevalence of dry land farming with its dependence on an increasingly erratic monsoon. At the national level, over 50% of the country’s arable area does not have access to irrigation, constraining farmers to do farming in only one season. This proportion rises for small farmers, and for western regions. However, strange though it may seem, using their wit and hard work, marginal farmers (with land holdings less than one hectare) seem to have a larger share of their holdings under irrigation. This highlights the startling fact that the smaller the landholding, the higher the irrigation coverage.

Irrigation can be of flow type, from surface sources, or from ground water. Lacking the former two, western India seems to get most of its irrigation from groundwater aquifers. Since these regions also see greater stress on farming, higher intensification of agriculture has led to unsustainable withdrawal. There is,therefore, a need to reevaluate methods to irrigate farmland in India. See: Time has come to rethink the ways we irrigate farmland

By contrast, eastern landscapes have not used much of their abundant groundwater. A manifestation of this is that while in Banaskantha district in Gujarat, the maximum depth in water table in January 2016 was 59 meters below ground level (BGL), the worst level in Assam was only 19 meters BGL in Dhubri district. Yet, groundwater does not seem to be fully used for irrigation in the east, as the total irrigation cover is still less than 5% in a state like Assam.

After interacting with 67 farmers in South Kamrup district who are using small and large pumps, to see how the two types of irrigation fared, a study conducted by Centre for Development Research found that a large number of large pump users had shifted to using small pumps.

Some two decades ago, shallow tube wells powered with 4-6 HP pumps formed a popular irrigation mechanism in Kamrup. For a state with 85% of sites having water available at less than 5 meters below ground level, this is quite surprising. Large withdrawals of water for growing paddy, coupled with less on farm control on water, led to unsustainable withdrawals. This led to disuse of the pumps and a stop on their spread despite easy availability in the market. In recent times, the smaller farmers have now tended to shift to small pumps. They are using them not so much for paddy but for less thirsty crops. 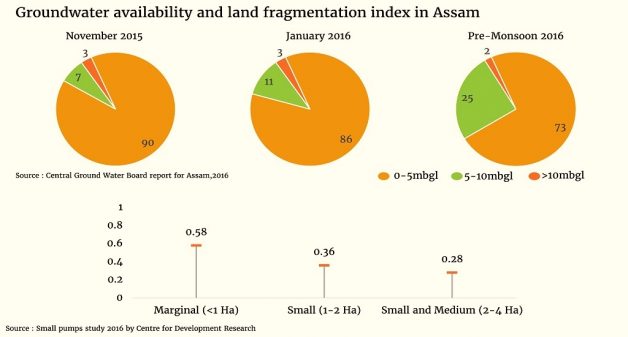 The reason for the spread of small pumps is the much lower capital cost. A small electric pump of 1.5 HP costs barely Rs 8,000 and can be run on a domestic power line. This contrasts with larger capacity pumps whose prices could be much higher, including special power transmission arrangements. Similar comparison on costs puts small diesel pumps ahead of larger ones. While reduced to per HP, the capital cost could be higher for smaller pumps, the fact is that the extra power is redundant in the view of easy access to water in abundant aquifer.

Even the paddy growers among the users have little reason to despair. The region has huge standing surface water sources and abundant rainfall. So, dry patches are few and far between, needing only a small critical irrigation, which the small pumps can support. These are therefore making inroads to act as alternatives to the larger capacity pumps for this purpose.

The best advantage with small pumps is that they are lighter and can be easily carried from one point to another. This helps a farmer to carry it to his different parcels of land. The lightweight pumps, coupled with the fact that electric connections tend to be fixed, means that small capacity diesel pumps are more popular among the users of small pumps. This advantage beats the higher operating costs of small diesel pumps.

As fragmentation of land is lower in case of marginal farmers, the natural choice for them is an electric pump. Additionally, a small diesel pump and a small electric pump cost no more than Rs 15,000 combined, and therefore are being used by small farmers, in whose case fragmentation causes the land to be scattered much more than marginal farmers.

What are the drivers of this change? Vegetables do not require the sort of volume of irrigation needed by paddy. Thus, not only are they better paying, they also need less water, which can be supplied by smaller pumps. Increasing population and growth in urban centers has tended to push the demand for vegetables in the region. Small towns such as Bagan and Loharghat, too, see a presence of dealers to purchase vegetables in bulk. In fact, it is not a rare sight to see vegetables being carried on boats in interior areas on smaller rivers. 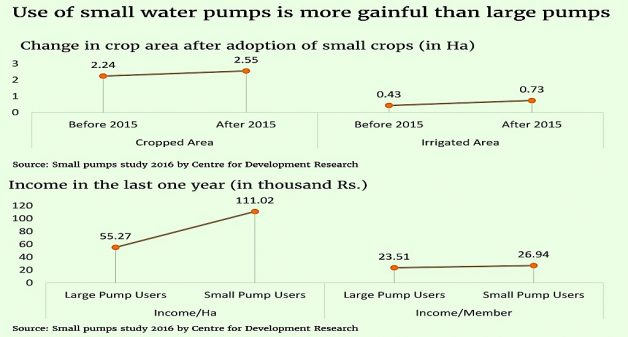 The study pointed to the fact that small pumps could be a viable solution for farmers with smaller landholdings, with easily available water and with higher fragmentation of land. Even if the answer is an unequivocal yes, it still is the condition of a large number of farmers in a state like Assam.

Given the state of affairs, if provided with small pumps, and extending it to regions beyond South Kamrup, it is entirely possible to double the income of small and marginal farmers in Assam. The government might want to intervene to reach this large number of farmers, who are still facing distress in agriculture and migrating in large numbers to cities, with a solution as simple as a small water pump.

Bikalp Chamola is a researcher with Pune-based Centre for Development Research. He has earlier worked with Rajeevika livelihood mission in Rajasthan. Chamola is a graduate of Institute of Rural Management Anand.

Be a Part of Our

Connect with us on